Go Ahead and Get Jammed Why Don’t You…

Let me preface this by saying there are two pretty distinctly different ways to get jammed. The first, and worst, is by hitting a ball weakly toward the handle of the bat, on the ground, to the pull side.

That kind of getting jammed is never good.

I see it happen often with young hitters, who are typically overzealous, and can’t wait to swing at pitches, that if the bat didn’t get in the way of them, on their way to home plate, would probably result in the batter getting hit by the pitch, somewhere in the groin area. It’s amazing, after years of playing, coaching, and watching baseball, it astounds me to this day, to see hitters swing at anything that resembles an “on the plate, inside fastball,” with the expectation of hitting it to the moon. More often than not, a swing at one of those pitches, results in getting jammed (the bad way), weak contact, a sore thumb, and a severely bruised ego.

Now, the other way of getting jammed — the right way — by backing the ball up at home plate, and creating great barrel path “through” the baseball — that way — I suggest to everyone. Well, if you want to be a great hitter anyway.

The best hitters in the world get jammed… A lot.

It doesn’t happen because they’re trying to (heck, sometimes they actually might) get jammed. It happens organically. Because they have a great approach. Because they understand what it means to let the ball get deep.

How many times have you gotten a good pitch to hit in your lifetime, and pounded it into a 6-3, or 5-3 groundout?

If you’re anything like me, you’ve worn out those two paths of grass on the fields you played on growing up. I can’t tell you how reluctant I was (especially when I was young), to let the ball actually travel to a place where I could do more consistent damage, and give myself the best chance to be successful.

I hear coaches talk all the time about hitting the ball “out in front.” I cringe when I hear that. Now don’t get me wrong, you need to hit the ball somewhat in front of your body, there’s no question. But, the visual I get, when I think about that terminology, is one with outstretched arms, and so-called “extension.” That can be a dangerous way to teach, and talk about hitting, because all of the good stuff happens further back in the hitting zone.

What’s the good stuff you ask?

Well, to me, it’s not as much about the 400 foot homer you hooked down the line because you got fooled by a breaking ball, and you happened to catch it out front, and get through it enough to keep it fair. The “good stuff” is the flared single over the second baseman’s head to knock in the winning run. It’s the broken bat, humpback line drive that gets you going when you’re scuffling a little bit.

Those guys have this innate ability to understand that the solution comes in understanding how to find the opposite extreme. Innately, most of us are terrified of getting beat by a good fastball. More often than not though, we end up getting that ball too far out in front, and it turns into the old ground out to shortstop. Great hitters figure out that going the other way — backing the baseball up — helps us get back to being in the middle. And when we’re in the middle, we’re on time. What it comes down to honestly, is identifying opposite extremes. Once you’ve done that, it’s much easier to get yourself feeling good again.

The problem nowadays is that they only show homers on the highlights. Instagram is full of exit speed, launch angle, distance traveled, and so on. Nobody talks about the guy that went 3-for-4 with a broken bat hit and 2 RBI. Sure his name might scroll across the bottom of the ticker, but for the most part, nobody’s paying attention.

The thing is though, at the end of the year, you look up, and see that guy hitting .330, vs. the guy that was in the highlights, whose hitting .220. Now, I’m not sure what’s more right or wrong anymore, but the only thing I can tell you is that hitting .220 is awful lonely. It can make you feel like you’re on an island by yourself, with nothing to do. It’s not much fun. On the other hand — .330 — well, that makes you feel invincible. Always confident, no matter whether you’re 0-for-4, or 4-for-4, you know you can put together a great at bat, especially in the moment where the game calls for it the most.

If there’s anything you take from this article, make it be this — getting jammed, the right way — is a good thing. Heck, scratch that, it’s a great thing. There’s a lot more knocks floating over the second baseman’s head than there are on the ground to shortstop. That, I can promise you for sure. 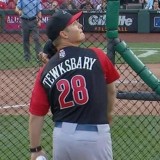