My Personal Transformation To A Better Swing

Editors Note: I hope you didn’t think I was kidding about the magic!

Coach: “you have an off day today” Me: “thanks, I’ll nerd out and practice card vanishes” @orbitbrown @theorbitdeck #eyecandy #theorbitdeck #cardmagic #practice

Hi guys! My name is Tyler Heineman and I play for the Milwaukee Brewers. I’m so excited to join HittingDaily.com and talk some hitting!

A little bit of background information: I walked-on to the UCLA baseball team in 2010, was drafted in the 8th round by the Houston Astros in 2012, traded to the Brewers in 2017. Over these next few months, I’m going to talk about my experiences, my thought processes, and my preparation.

I thought it would be fitting to start off by talking about some swing changes that I have made over the off-season. What thoughts led me to make these changes, and share some video from last year, to this year. So, let’s roll.

Have you guys ever seen a swing in slow motion and thought to yourself, “Wow, that’s an incredible swing. My swing looks nothing like that.”

If you are nodding your head yes, don’t panic! I’ve been in the same boat for my whole career.

I see all of these great hitters like Jose Altuve, Mike Trout and Bryce Harper swing for years. I study their swings (yes, we still do that in pro ball, even more so now) and I notice the same thing in each of their swings: upper and lower body dissociation. Tewks talks in depth about this in his book, but basically it’s what I think is the most obvious component of the “elite” swing. The upper and lower body “separate” from each other and create a “rubber-band” like effect, so that when it comes time to hit the ball, you are utilizing all of your strength to drive the ball hard and far. If you read Tewks’ book, you will understand when I say that I have had a “push” swing throughout my career.

Coaches and players have tried to help me with my swing: telling me to move my hands here, or load my hips like this, only think about firing the hips, or even close off my stance. The problem is: I knew what I was supposed to do, but it never actually looked right when I saw it on video. It wasn’t until I hit with Tewks and CC that I actually “felt” the “elite” swing. And watching it on video, it’s better! So, I’m going to share a few things that they pointed out to me.

Remember, there are hundreds of ways to teach the same thing, some people respond to certain verbal cues, while others (me) have a harder time with the simple “try leading with your hips and keeping your hands back.”

Thank God for Bobby Tewksbary. After the first few swings, he simply said, “don’t load your hands.” I said, “excuse me? I need to load my hands to have rhythm and maximize pop.”

He just nodded in his chair and told me to humor him.

Little did I know, he was filming me. I get done with my round and he shows me the video. I’m not lying to you when I tell you that these were the best swings I’ve ever taken in my life. I had rhythm, I had timing, and most importantly, I had that separation that I so desperately longed for. My hands moved back, or loaded up, but it wasn’t until I started my attack towards the ball with my lower body.

This just happened naturally. It’s actually really hard to have your hands “not load.”

So… don’t think about loading my hands… Hmm — genius.

I’m rambling a bit, but the message is this: every single person wants to get better, but no two hitters are the same. What works for me, might not work for you and vice versa. Sometimes it takes a simple verbal cue from someone to allow you to “feel” what you want to feel. If you get the feeling you want, or the results on video that you want to see by thinking about “hitting the ball oppo” or “keeping your head still,” then that’s your cue! Once you have the feeling, you roll with it until it becomes muscle memory.

Here is a side by side video of my swing from last year, and my new swing (honestly, only really focusing on keeping my hands still). Notice how (besides the fact that my stance is completely different), my hands do NOT load “back” during the initial phase of the “gather” in the new swing. They move down, sort of like cocking the bat. This allows my lower half to initiate the swing.

This second part of the load makes it clear. When I load my hands back right away, they have no more room to go. So, my margin for error on pitches that are different speeds (change-ups and breaking balls) was slim because I had already completely loaded my hands. Whereas, by waiting until the unloading or transfer of weight phase in the new clip, it buys me time to recognize the pitch and location while allowing my bat to continue moving.

Trust me, starting your hands from a dead stop is really tough to do when someone is throwing 95 mph and unless you are right on time, you will not drive the ball like you are capable of. Think about it, if you are going to punch something, would you have more force by punching from a dead still position? Or would you be more powerful if you were allowed to wind up and keep that fist moving?

Here are the full swings side by side. Notice that by simply thinking about one verbal cue, my swing as a whole, improved significantly. My bat path cleaned up, my separation was better, and I transferred more force into the ball.

Sorry for the long winded first post! I get excited and then start to ramble. That being said, I strongly urge you as a player, coach or parent to find certain “cues” that help you create the feel and the look that you are searching for. When you do that, you will be well on your way to becoming a better hitter or coach. 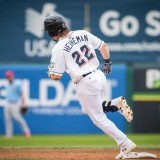